The Wilson Family acquired the vineyard property located in Templeton, California in 2012 after a family friend, Joseph Farley, learned of its availability and suggested a visit.  The Wilson family had the good fortune of meeting the Farley family on summer vacations in San Diego back in the 1970s. A lifelong friendship was formed between the two families over early morning surf sessions. In the early 1980s, Joe’s father Al bought a vineyard property in Paso Robles to fulfill his dream of becoming a winemaker. This allowed Joe to gain hands on experience cultivating grapes and producing wine from a young age. Fast forward to 2012, Joe called to tell the Wilsons of a small but beautiful vineyard property in Paso Robles that had been neglected and taken back by the bank. The Wilsons fell in love with the stunning property and jumped at the opportunity to bring it back to great condition. The picture below captures two surfing buddies and now business partners. On the left is winemaker Joe, before he knew anything about wine. Standing next to him is owner Kevin Wilson.

Joe, a long-time wine maker in Paso Robles continues to this day as vineyard manager and winemaker at Wilson Family Vineyard.  In 2012 the vineyard consisted of Petite Sirah and Syrah vines that were well maintained and produced consistent quality due to the excellent location and westward facing slope of the vineyard along with ample well water supply and rich calcerous soil found in the Templeton Gap region of Paso Robles.  Despite the great quality of the vines, the same could not be said of the main residence, barn, and guest house on the property so in 2014 we began an extensive two-year renovation.  In 2016 the vineyard released its first bottling production of 2014 Petite Sirah, Syrah, Epic Red (Cabernet Sauvignon-Petite Sirah Blend) and Vino Rosso (Zinfandel-Petite Sirah Blend).  We continue to produce all four varieties.  In 2019 vineyard space was cleared and prepared for new plantings of Cabernet Sauvignon and Grenache vines on the property which were planted in the Spring of 2020. 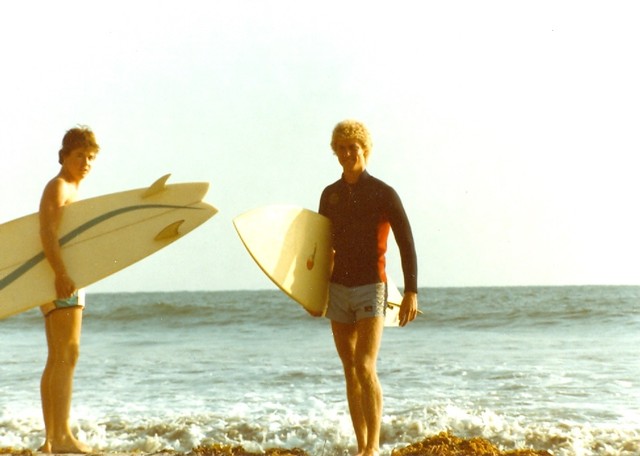 Paso Robles, located in the central coast halfway between San Francisco and Los Angeles, is now the largest AVA (American Viticultural Area) in California with in excess of 200 wineries and 40,000 planted acres of wine grapes.  However, Wilson Family Vineyard is a small producer, a small fish in a very big pond, but dedicated to producing quality wines.  What is most unique about the Paso Robles AVA?  Visitors and locals alike would probably say the daily wild temperature swings known as the “Diurnal Shift”, especially during the warmer months when summer temperatures consistently reach 105 during the day only to drop 50 degrees at night.  The diurnal shift allows grapes to achieve power and full ripeness and maintain refreshingly high acidity levels.  This is an area for big, bold Rhone variety reds like Petite Sirah, Syrah and Mourvedre, and Bordeaux varieties like Cabernet Sauvignon.  Perhaps not the best location for lighter wines like Pinot Noir and Chardonnay which do very well just 30 minutes south of us in the Edna Valley.  Here in San Luis Obispo County we are in very good wine making company, bordered on the south by Santa Barbara County and on the north by Monterey County - this is California wine country.  In terms of soil conditions, the area is best known for calcerous, clay-based soil with high lime content, conducive to the unique earthy quality of Paso Robles wines.

During the first two years of ownership we sold our Syrah and Petite Sirah harvest to Robert Hall Winery, then starting in 2014 we began production of Wilson Family wines with the crush of the entire harvest at nearby Croad Winery followed by racking and two years of barrel storage in brand new high quality French Oak barrels.  It was good luck that 2014 was an exceptionally good year for wine throughout the area.  In the summer of 2016 we bottled the estate Syrah and Petite Sirah, and used surplus amounts of Petite Sirah to blend with Cabernet acquired from a local winery; we also blended Petite Sirah with Zinfandel acquired from Croad Winery.  The Cabernet blend was named Epic Red and the Zinfandel blend was named Vino Rosso.  As noted above, Cabernet Sauvignon and Grenache vines are now being cultivated at Wilson Family Vineyard and these two varieties will be estate wines in the near future.  However, before that is ready for release, we will be bottling a GSM blend (Grenache-Syrah-Mourvedre), the perfect Rhone-style blend of the Paso Robles region.  We are currently barrel-aging all 3 varieties for this production. 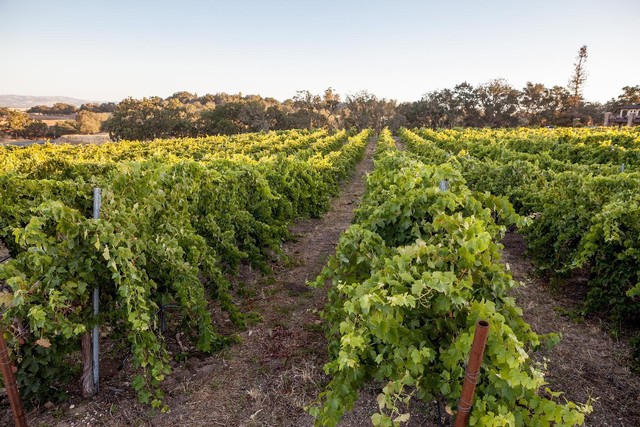 Wilson Family Vineyard is a popular destination for vacation rentals, events, retreats, and weddings.  The property is listed on VRBO as property number 616293 and the address is 3074 South El Pomar Road, Templeton. The main house consists of 5 bedrooms, large second floor balcony, a pool, patio, outdoor grill, and fire pit.  For larger groups, two guest apartments are available for rent.  In addition, the barn was renovated to accommodate indoor events and gatherings.  Unlike most wineries in the area, Wilson Family Vineyard does not have a tasting room open to the public.  Thus, booking your stay at the property in essence provides you a private vineyard experience.  The house, guest apartments, and barn are situated on the hilltop of the hillside vineyard, with views facing west, making the main house balcony a particularly prized location during sunset. 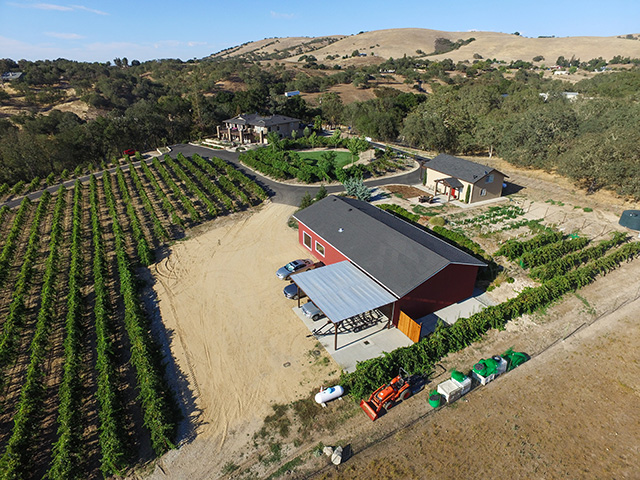